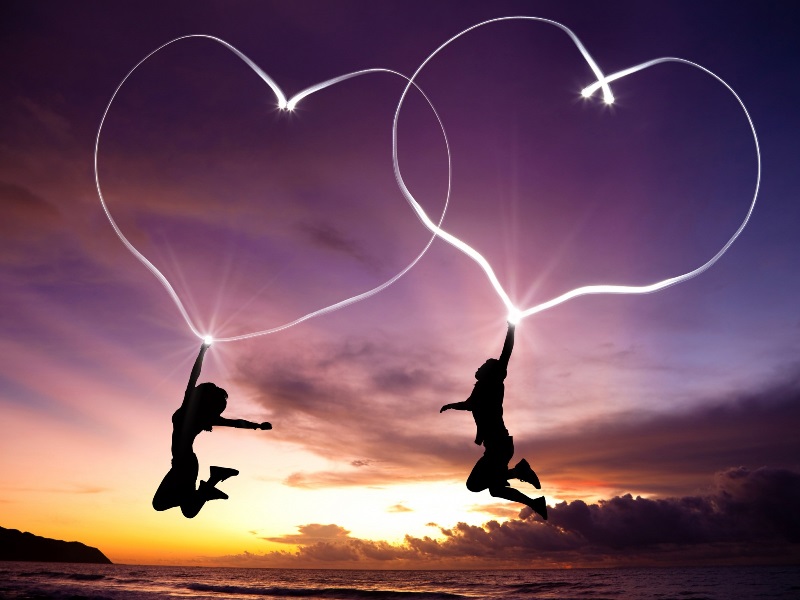 I recently wrote a blog called: ‘Do we forget our first love or how people have made us feel or are we still in love?’ and I was talking to one of my good friends who lives in Spain on the subject and I asked her whether she would remarry if the right person came along? She said politely ‘no’….. and since then I have asked friends and associates the same, to which I received a mixed response…. So, what exactly has happened to society? Do we believe we need our independence too much, that Mr. Right or Mrs. Right does not exist, has love faded away into the Ethernet or are we all living in fear?

About a week ago I watched a great movie called ‘A walk in the clouds’ – it’s based on an Italian film: ‘Four steps in the clouds’ (1942). The former film is a 1995 American romantic drama film about a young soldier returning home from World War II, who is looking to settle down and start a family with the woman he impulsively married just before enlisting. After learning she is not what he imagined her to be, he heads north alone to Sacramento in search of work. Along the way he meets a beautiful young woman who is heading home from college to her family vineyard to help with the grape harvest. When he learns she is pregnant and was abandoned by her boyfriend, he offers to stand in as her husband so she can face her Old World domineering father. During his stay at the vineyard, they fall in love and face the angry rejection of her father together (watch the trailer here).

The question I asked myself is how many people would actually marry someone who was pregnant with someone else’s child, and how many people would wear a chocolate gold wrapper out of his box of chocolates as a ring wedding ring in today’s world, all because of love?
There is a great quote by Stephanie Meyer “After all, what was more important, in the end, than love?” which I feel really resonates with the story and life.
Why should statistics be a spokesman for people in love, why pounce on increasing divorce rates and the fact that only fathers’ names go on wedding certificates, suggesting marriage is still linked to patriarchy, to an old world view that women should submit to men.?

The ‘Proposition of Marriage’ (those against the idea) delivered a mix of interesting and engaging reasons for why they thought marriage is outdated, including that if we’re all going to live until we’re 95, do we really need to be with just one person?
In ‘Opposition of Marriage’, (those in favour of the idea) people discussed that the concept of marriage is not outdated. And that’s because the reasons for marriage these days are far different from years gone by. Marriage itself is changing.

Couples, it appears, no longer feel the need to get married as a constitution or status symbol, to do so before they embark on their lives together. Most people live with their other half years before marrying them. Marriage is no longer the path to having children either. I know lots of people who have kids and then decide to get hitched later down the line.
The beautiful thing about marriage is that, in the West at least, you don’t need to do it as a part of growing up. Marriage is no longer a prerequisite of adulthood. You do it if and when you want to do it.
Of course, you can have a perfectly good life without marrying. I know many couples who cohabit but just don’t feel the need to tie the knot.
They don’t need a bit of paper or a wedding ring to prove to the world they’re in love. And that’s absolutely fine and their choice; nobody should ever feel forced into marriage if they don’t think it’s for them.
The number of marriages that took place in England and Wales was 247,890. That’s about one marriage every two minutes. Marriage is still incredibly popular.
By comparison, there is one divorce in England and Wales about every 4 and a half minutes, statistics show.

So are we less free or restricted to those we share love with?
Love is and has always been an essential value we obtain from other people. In giving love, we are responding to our own values realized and made beautiful by another person. In receiving love, we receive a kind of reward for the virtues, habits, and qualities we have cultivated in our own characters.
It is often said that true love is “unconditional,” or that “love is blind.” If this were true, falling in love would be akin to throwing darts, and we would simply happen upon certain people whom we loved for no reason whatsoever. And if love were unconditional, nothing they ever did, no matter how hurtful or evil, could make us abandon that love.

Love is actually our response to those few people we meet toward whom we feel the highest respect, admiration, and attraction. It is not a blank check granted to random passersby, but instead the result of our careful examination and approval of another’s character. Granting unconditional love is like appraising a piece of property without examining its size, quality, or location: one is likely to grant unearned love to the unworthy and withhold love from those who deserve it most.
Before you can really grant love to those you value, you must be in tune with your own values and character, and know what it is you believe to be the right and the good, what qualities you are looking for in other people.
Another popular view of love is that it involves a great deal of self-sacrifice, that it is a selfless act. After all, don’t most lovers spend an inordinate amount of time and money on their relationships with each other?
Don’t we have to comfort those we love through times of hardship and failure?
Sex is also an important part of a romantic relationship. Just as Objectivists do not accept the false dichotomy between mind and body, they reject the traditional dichotomy between love and lust. When two people love one another spiritually, it is natural and good for them to express that love physically. This is not to say that sex should be taken lightly; it is our most intimate act and joyous expression of our love for another person. But the old idea—encouraged by religious conservatism—that sex somehow destroys or undermines love, I have found to be false in conversation with others.

The conclusion to this subject is in the essence of a healthy, loving relationship is often trade: one offers it as a recognition of others’ characters, and receives it as recognition of one’s own.

My belief is as Max Muller once said ‘A flower cannot blossom without sunshine, and man cannot live without love.’

To Love and be Loved is in essence everything in life.